This article was written by Joe Elvin for Menprovement.com. We find and share the best self improvement content for men on the web. Enjoy.
This is a guest post by Joe Elvin, a dating/relationships writer and author of ‘The Thrill Of The Chase’

It’s the most notorious dating advice of all time, but is it actually useful?

There are plenty of singletons who have spent years trying to ‘just be themselves’ with nothing to show for it. These people might argue it’s terrible advice. The truth is it’d be the best tip to give someone before a first date – if it wasn’t misinterpreted so often.

Here’s What Just Be Yourself Doesn’t Mean

Many singles hear ‘just be yourself’ and think it’s OK to be shy and nervous. They see this phrase as an invitation to flood their date with desperate text messages or cringeworthy declarations of affection. After all, they’re lonely and that’s what they truly feel like doing.

Many Hollywood rom-coms reinforce this belief. Films like Hitch, Notting Hill, Superbad, There’s Something About Mary all feature ‘loveable losers’ getting the girl without engaging in any notable self-improvement.

Ryan Williams, founder and head coach at Social Shortcuts, believes the feel-good message of these films are false. He explained: “The fairytale that there is ‘someone for everyone’ is a nice thought but the harsh reality is that there are millions of people who never end up finding anyone.

“That is the uncomfortable truth of dating. If you have flaws in your personality, it’s better to address them than to wait for someone to come along who will accept them.”

It’s not just the needy nice guys who may be affected. Some people may see ‘just be yourself’ as a free pass to turn up to the date without paying attention to their appearance or hygiene. Others could interpret it as an excuse to be rude, selfish, tight etc.  These are clearly all unattractive traits. Your crush will always favor someone who can ‘just be themselves’ without being needy, belligerent or thoughtless –  and by showering before dates.

This is the version of ‘yourself’ people are referencing when they say just be yourself. The best version of yourself.

Stop Putting on a Front

When surrounded by friends, we’re usually relaxed. We don’t think too hard about what to say. We mostly blurt out whatever is on our minds.

We make dumb jokes without worrying who finds them funny. We speak freely  about our passions without filters or fear of being judged. Our bar for what’s ‘good enough’ to say is set incredibly low. We are ‘just being ourselves’. In doing so, we attract friends who like us for who we really are. This all seems to go out the window when we’re around someone we’re sexually attracted to. Suddenly, we worry our true self isn’t good enough for this gorgeous stranger, so we put on a front to try and impress them.

Men commonly adopt the ‘perfect gentleman’ persona. A type of James Bond character they’ve seen woo women in movies. Even worse, they’ll put on this ultra-polite ‘Hugh Grant’ personality, who does nothing but supplicate, compliment and agree with everything she says.

We think these fake personalities will win the other person over. The truth is they’re so see-through. There’s no bigger turn-off. When our well-meaning friends utter ‘just be yourself’, they’re really telling us to stop being so fake and try-hard. Even if it somehow works, it’s exhausting, soul-destroying and you’re eventually  going to be found out.

What Type of Person Can Always ‘Just Be Themselves?’

The type of person who can always ‘just be themselves’ during the early stages of dating is a rare specimen. It’s common to crave our date’s approval so deeply that we can’t help but put on some sort of front.

Women are just as guilty of this as men. Ever been out with the ‘mega-bitch’ who refuses to show any sign she’s having a good time – or the ‘innocent princess’ who has never giggled at a rude joke? Both are classic personas put on by women who are nervous to impress a potential suitor…

If you can act the same around your crush as you can among your closest friends, it communicates you feel worthy of taking up that person’s time. You don’t need to try too hard to impress them. You’re already truly confident in your own awesomeness. If your crush doesn’t like you, that’s their loss. There’s plenty of people who already do like you, so you’re not desperate for this one person to be your partner.

This attitude is so attractive. When we meet people like this, we’re naturally drawn to their personality. Act like this and women will often fight your approval, especially if they’re used to men falling over their feet to impress them.

What if We Don’t Feel Worthy?

” Just be yourself ” is most commonly dished out to nervous daters. Ironically, it’s these people who most likely feel that ‘just being themselves’ isn’t enough to impress anyone. After all, feeling unworthy is the most common cause of first-date nerves.

So what can you do if you truly don’t believe you’re good enough for your date? Ryan Williams suggests not concentrating on impressing your date and instead focusing on having a fun time. He said: “Frame is it as a positive if you both had a good time. If you go on a date with some sort of agenda such as getting a kiss or seeing them again, that’s going to make you more nervous.”

“If you see it as a success that you both had fun, you can’t really lose, if you’re trying to be nice.” This alternative agenda is similar to the ‘mission’ you set yourself when you’re ‘just being yourself’ with your closest mates.

Try it on your next date. Treat them like you’ve been mates for years. Make dumb jokes, tell silly stories, laugh unashamedly, just like you would with your friends. Throw in some flirting and physicality. Then, when you see signs they’re attracted, make a move. If they don’t like it, laugh it off and try again later. If she’s not into you, be confident your next date will be. With this attitude, you’ll find it simple to be the best version of you and ultimately find that partner who loves you for who you really are.

Soon enough, you’ll be the one telling your perpetually single friends to ‘just be themselves’.

Joe Elvin is a dating/relationships writer and author of ‘The Thrill Of The Chase’ How To Enjoy Singledom, Become A Better Man And Get The Girls You Actually Want’ 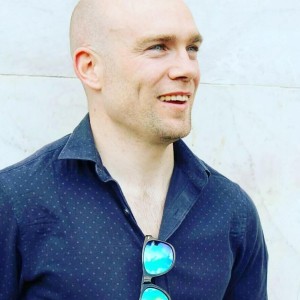