A Lesson in Manliness from a “Homeless” Guru

Those words are forever etched into my mind. I hope to never forget them. More importantly, I hope I will never stop trying to live them.
These words were words written by a man who many, including myself, believed to be homeless in a place called Bristol, VA. Bristol is a twin city shared by Virginia’s neighboring state Tennessee, and is nestled right smack dab in the middle of the Appalachian Mountains. It is a beautiful place where many an interesting character lived/live (they came ‘out of the woodwork’ so to speak), and a place where quite a few interesting stories birthed their beginnings.
Louis Perna II was his name (commonly known as Lu), and he was no exception as far as his character or story are concerned. Unfortunately, I didn’t get to know either until after his death.
I have very few regrets in life, but not knowing him is definitely one of them. Not stopping and taking the time to talk to a man I used to see almost every day, and then reading his story afterwards and realizing how drawn I am to it, is another reminder in life that there is Only One Way.
I, like everyone else in town, used to see Lu – a Vietnam vet – constantly walking up and down the street near one of the interstate exits in town always barefoot and always with a dog. I remember always thinking that there was just something different about him. Something unhomelessy.
Something I couldn’t quite put my finger on, but that there were all these telltale signs he wasn’t quite your typical homeless person (if there is such a thing). Given the type of southern hospitality that existed in those parts, I knew it was very possible that it was by his choice and his choice alone he was barefoot all the time.
I couldn’t imagine in a place also nestled in the Bible Belt, and where I had met some of the most genuine and kind people in my entire life, that no one had ever offered him shoes or the means to buy them. After reading his story, I’m pretty sure he probably would’ve wished it didn’t happen much either.
I never saw him panhandling, or sitting on corners, or using his dogs for sympathy, or anything else cliche homelessy. Only walking barefoot with his dogs seemingly without need or want. “But how could that be?” my ‘cultured’ mind would ask. How can you be homeless, and not be homeless? What was the choice he had made?
Fuck, I wish I had stopped and talked to him.
His dogs in fact seemed to genuinely be his companions. Always appearing in excellent health and never being dragged along or stuck out in the heat. Just two or three cohabitants out enjoying the sunshine.
Going nowhere fast. I mean the man looked like something I can’t imagine someone choosing to be, but at the same time someone who was very content in the life they chose. I wanted to know more. I wanted to know if there was any truth to my inclinations. If he was more than homeless.
If he was some new category of homeless. Some new species. As if he had to be something to justify my own disconnect and hesitance from getting to know another fellow human being. Sadly, though, I let fear and excuses get the best of me and I never found out any of those things before he died. I missed out on meeting an amazing person I believe.
To read a summary of Lu’s story please go to this page before moving forward.

Listen To Your Heart

Sometimes in life words hit you at just the perfect moment. Right when you’re ready to hear them, and seemingly given to you as confirmation that the change you are going through in life is just and that you are on the right path. Such was the case when I ran across this article. It was previously featured in the Bristol newspaper shortly after Lu’s death.
As sad as I was to realize what an interesting man I had missed out on meeting, I was happy that someone, many someones, had taken the time to get to know him and were able to share his story. Although brief, it is one of the most incredible stories I have ever read, and his journal is at the very top of things I would like to read before I die.
When I read this article in the paper several years ago it was at a time when I was experiencing a journey in life of my own. I found myself inspired by and in awe of this quasi homeless man.
Hell, I even envied him because a part of me has always wanted to walk around barefoot all summer long. At this time in my life, I was starting to realize little by little that what society had created for me to live up to as a man was actually far from what a real man was.
And when I read Lu’s words that day it seemed they said everything that my mind and heart had been trying to say all along. He said exactly what I needed to hear to decide that the path I had been on was not the path that I needed to continue towards becoming the full man I could be.
The man I am today.
For that I am forever thankful. In essence, what I took from him and what I had been needing to absorb all along; is that, there is no image of what a real man is (home or no home). You just are, or you aren’t one.
A man is not GI-Joe, or John Wayne, or Hulk Hogan, or Chuck Norris, or Michael Jordan, or any other glorified image of what ‘real’ men are that society has so commonly spotlighted for young boys to live up to.
A man just is.
He can be strong and tough, but he doesn’t have to be. He can have an awesome fade-away jump shot or one hell of a spinning back kick, but he doesn’t have to. In fact, any man that has to do, or be, or have something in order to be one simply isn’t.
A man can be a computer geek, or gay, or sensitive, or artistic, or anything else in the world. A man doesn’t have to be like any other man.
A man just is who he is and owns it. He doesn’t need to be more or less. Only desiring to be a better version of himself everyday.
He doesn’t need to boast or brag. He simply commands respect in the virtuosity of his actions and in the way he equally treats others.
A man, a real man, is one who bucks the trends and boldly goes his own way.
True manliness is non-conformity.
Thank you Lu. 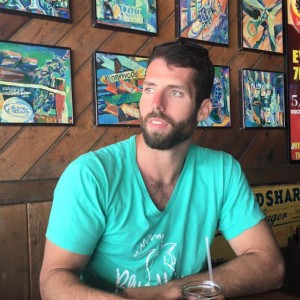 A lover and a fighter. I was born and bred a GI-Joe wielding, college football playing, all-american bleeding, Grade-A typical white guy. Somehow after surviving all those testosterone fueled drunken nights, bar fights, and random hook ups, I discovered that my idea of a man was not one at all. It took years of deep soul searching, sequential screw ups (you’re never too old for bad decisions), and life being life on top of that to undo what society had taught me a man should be and to actually become one. That comfort - to be the man your supposed to be and not what you think you should be - is what I’d like to help other men find. Hopefully easier than I did.