How to Apologize to a Girl Without Appearing Weak

What was your first thought when you read the headline of this article?
Come on, be honest. It’s okay to say that you thought that this is going to be an article that tells you to bring flowers and to wipe the floor with your knees while you are crawling in front of her.
The uncomfortable truth is that we men tend to be quite afraid whenever we hear the word “apologize” and no, it’s not because we are sick and tired of the One Republic song with Timberlands “eh, eh…eh, eh”. It’s because we have been told that apologizing to a woman is something for wussies. We have been told that it’s a sign of weakness.
I mean, I am a dating coach and I know many of my colleagues who claim that apologizing to a girl is the last thing on earth that you should do. As a result, some guys would rather hang a snake around their dick instead of considering an apology.
I hope you don’t do this with the snake (that poor animal) and I also hope that you understand that apologizing is not necessarily a bad thing. Just because you say “I am sorry” doesn’t mean that she respects you less. In most cases she will respect you even more once you apologized, especially when you made a really big mistake, such as sleeping with her identical twin sister.
Yes, in this case, you need a really good apology. And you also need to be careful to not apologize in a way that could in fact be seen as weak…and that could cost you a shitload of money.

How to NOT Apologize to a Girl

What’s the first thing that most men think of when they have the feeling that they need to apologize to a woman?
They think that a nice gift will do the hard work.
Unfortunately, this couldn’t be farther from the truth, for reasons that I am going to share with you in a couple of seconds. I mean, it does work, but only if you are together with a girl who is extremely materialistic and who doesn’t really give a damn about what you did, but about what you bought her.
In this case I want to congratulate you to your relationship. You are together with a materialistic gold digger who allows you to do whatever the hell you want as long as your wallet bleeds for it. You for sure made the right decision my friend.

The second most popular way to apologize to a woman is what I call the solicitation apology. This is a combination of “oh my god, I am freaking scared that you will never forgive me” and “I am the neediest man in the world”.
This is the number one apology that is responsible for the most breakups. I mean, you basically force a woman to break up with you when you think that the solicitation apology is the best thing to do.
The solicitation apology implies that you sob the “I am sorry” with big crocodile tears, that you ask her for forgiveness (at least 100 times with your knees on the floor) and that you start to cry the seconds she says “I forgive you”.
No woman can possibly respect you after you apologized to her in this ridiculous way, no matter how confident you appear. I am sorry to say this, but if you want to rescue your relationship, you shouldn’t even think about apologizing like this.

Now we come to the last form of apology that you should forget about before you get tempted to actually put them into practice. What I am about to tell you is the absolute worst form of apology that you can possibly think of. Unfortunately, I have heard from quite a few guys who apologized in this way…and who ended up miserable and broke.
What could “the ring apology” possible be? Yes, you are correct. It’s the good old “do you want to marry me?” apology. Don’t laugh. A lot of guys get married for all the wrong reasons and this is definitely one of the worst.
Before you even think about putting a ring on the finger of a girl because you want her to stop being angry at you, you should think about WHY she is angry at you. The fact that she is pissed is proof enough that something in your relationship isn’t perfect.
Why in God’s name would you ask a woman if she wants to marry you when you know for sure that something in your relationship is anything but perfect? It doesn’t make any sense and it usually doesn’t lead to a happy marriage.

The One Thing You Have to Understand About Apologizing

Neither an expensive present nor wiping the floor with your body is a good way to apologize. Oh, and putting a ring on her finger is the worst of all three ideas. I hope that’s clear now.
There is, however, one thing about apologizing that you have to understand in order to make a woman forgive you and love you even more than before you made your mistake…unless you really banged her identical twin sister.
The one thing you have to understand is that women see apologizing as an emotional event.
While we men consider it as something we need to get over with until we can get laid again, women see it as something that is really important. Remember, women are emotional creatures and they expect you to heal their feelings when you hurt them.

How to Apologize to a Girl

So, how should you apologize to a woman?
You should do it by healing her feelings. It is really that simple.
Forget about the flowers and forget about the expensive handbag that you wanted to buy her. It’s all about the emotions, not about materialistic stuff. Flowers can be a good placebo for ten seconds, but if you want to keep her for the next ten years I suggest you adhere to the following step-by-step plan.

Take Full Responsibility for Your Mistakes

The first step towards the perfect apology is the hardest, at least for most men. As I already said, most men were conditioned to believe that apologizing for their mistakes is weak. As a result, the majority of men are not ready to take full responsibility for the mistakes they made.
This is not only sad, but also extremely dangerous. While you think that “it doesn’t really matter” and that “it wasn’t that important anyway” her whole world is going up in flames. You think it’s not a big deal. She thinks the opposite.
I think I don’t have to tell you about the consequences that this different way of interpretation can have for your relationship. That’s why taking full responsibility for your mistakes is so important. It might save your relationship.

Make it a Bit Funny

Now we come closer to the verbalization of the apology. There are basically two different ways of verbalizing the fact that you are deeply sorry for what you did.

In case what you did hurt her really bad, the serious way is better than the fun way. Just imagine you would decide to add some humor to your apology when you banged her identical twin sister. Telling her that “you look so similar, I thought it was you” is not the best idea.
However, if you did something that hurt her a bit (like forgetting her birthday) and she is just slightly pissed, mixing in some humor can save your ass faster than choosing the serious path.

Have a Clarifying Conversation

Apologizing is never easy but in some cases, it is absolutely necessary. Just don’t make the mistake to wash the floor with your dignity or to, God forbid, put a ring on her finger because you want her to be happy.
The one thing you have to understand is that apologies are highly emotional events, at least for women. That’s why buying expensive gifts can never be the solution, unless that’s what she wanted in the first place.
Take full responsibility for your actions and your mistakes, add some humor to your apology (when appropriate) and have a clarifying conversation. 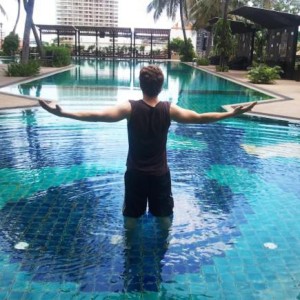 My name is Sebastian and I am the founder of www.globalseducer.com. My vision is to inspire, motivate and support men all over the world to find love and happiness through global dating. Once you got rid of your fears, learned how to seduce women and dated amazing girls all around the globe, I can confidently say that I have done a good job that I am extremely proud of.